SUNY Distinguished Professor James Piorkowski's composition, “Mila Rose,” written for solo classical guitar, has been published by IMD (International Music Diffusion), a music score publisher based in Paris.
"I composed this piece in 2018, a few months after my youngest granddaughter, Mila Rose, was born,” Mr. Piorkowski said. “I was in Buenos Aires at the time, and decided to incorporate rhythmic elements of the Argentine Milonga, which commonly has note groupings of 3+3+2 in each measure."

It can be purchased at http://www.arpeges.fr/fr/editions-musicales/mila-rose_1018924
To commemorate the
​reopening of Venice, Italy.

The Composer and the Guitarist
Friends of Vienna Concert Season 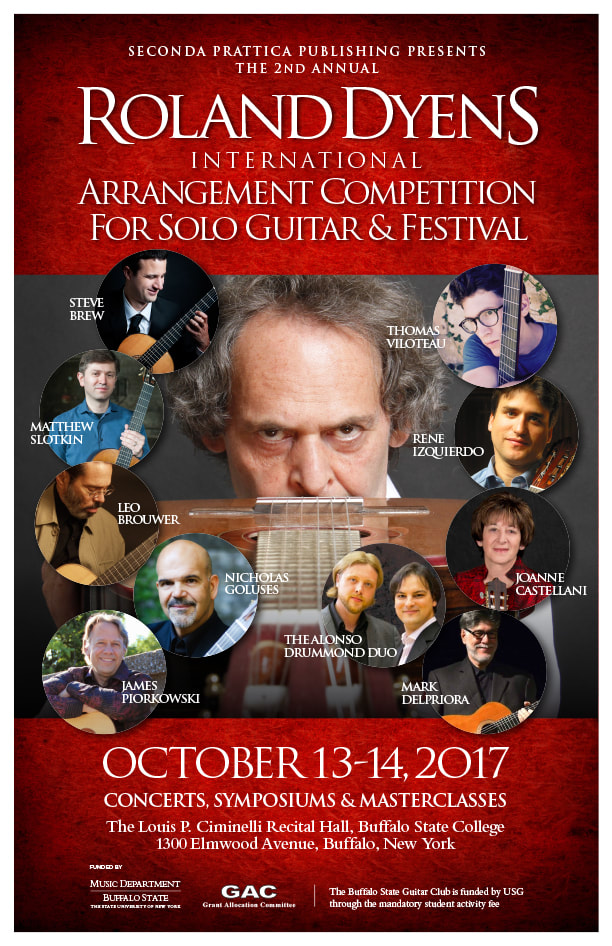 Friends of Vienna Concert with the BOLEO Quartet

A collaborative concert with the BOLEO Quartet, featuring the  Guitar Quintet, Opus 143,  by Mario Castelnuovo Tedesco.
​March 5th, 3:30 PM, at the Unity Church, 1243 Delaware Ave., Buffalo. Tickets ($12 and $5) available at the door.

Starting August 2nd, James Piorkowski will again be serving as guest faculty at the Keene Valley Guitarist-Composer Workshop. This week-long workshop is led by Matthew Dunne,  and is designed for student guitarists and composers who are interested in composing and performing their own music. We will work on specific exercises to improve creativity and compositional technique, and will explore issues central to developing a personal style on our instrument.

The workshop is located in Keene Valley NY, in the heart of the Adirondack Park, about 20 minutes from Lake Placid. The workshop concert, which is open to the public,  will be on Sunday, August 7, 2016 at 4:00 p.m. at the Keene Valley Congregational Church. To find out more details and to register, contact Matt Dunne at <matt@stic.net>

Be in the studio audience at 7 pm, February 18 for the live taping of Episode 15 of the Back Room Radio Hour at
Trinity Guitars, 800 West Third Street, in Jamestown, NY.  Call (716) 665-4490 for your free tickets.
Presented by WRFA Radio for the Arts, Martin guitars and Trinity guitars,
​the show this month will feature classical guitarist/composer James Piorkowski.

Listen to the Recording of WFRA Radio Interview

Freedom Flight for Flute and Guitar is now available

After being out of print for many years, James Piorkowski's  composition, Freedom Flight, written for flute and guitar, is once again available via Seconda Prattica Publications.
http://www.secondaprattica.org/freedom-flight-by-piorkowski/

"Rolando takes the form of a rather unusually harmonised tango; heavy accents and offbeat rhythms abound. The guitarist will find his fingers flying around right from the word go. A slightly slower speed leads to an extended section, before coming to a considerable climax. A gradually slowing down pauses on an exotically harmonised chord before [it] proverbially slams the door shut in our faces for a barnstorming finish. This is an unusual piece, but would go down very well in a fine player's recital. Therefore as such, I can heartily recommend this worthy publication to the better players amongst the readership" - Chris Dumigan, Classical Guitar Magazine (U.K.)

In 2014, Glen Cortese and the Western New York Chamber Orchestra commissioned me to write a piece based on George Bizet's opera, Carmen. Since the opera is set in Sevilla, Spain, it makes perfect sense to introduce the guitar to the mix, and the result is the Carmen Fantasy for Solo Guitar and Orchestra.

I gave its premiere performances this past February with WNYCO and maestro Cortese, and it had great success with the audiences. I performed it again in N.Y. City in May, and subsequent performances are currently being planned.
Proudly powered by Weebly